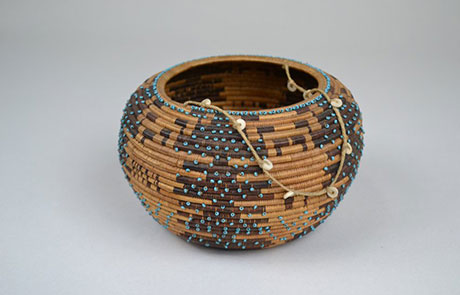 Boston Children’s Museum possesses an astounding collection of Native American cultural artifacts from across the United States, which includes clothing, tools, religious objects, and toys. The Museum’s collection of Native American basketry from California consists of nearly 100 baskets and cultural objects representing the Klamath, Mono, and Pomo Nations of Northern California as well as the Diegueño, Kiliwa, Luiseno, and Cahuilla Nations of Southern California. All of the baskets in the collection are distinctive and remarkable examples of basketry weaving as fine-art and double as containers for storage, to transport goods and food, religious ceremonies, and play.

There are two variations of weaving prevalent among Native California Indian basketry - coiling and twining. Both processes include wrapping flexible plant fibers around a stiff plant-based structure. Throughout history, weavers have not received formal training, but rather tribal traditions surrounding basket weaving have been passed down from generation to generation. Native basket weavers developed diverse patterns and motifs on the sides of their baskets. Many common designs and symbols are present across generations and among interacting tribes, but some symbols have been found to be specific to the individual maker – like an artist’s signature. Available materials for weaving each basket were dependent on the plants native to the area and the particular time of year. Basket weaving is a time intensive process requiring patience. In some cases, it took many months to gather and prepare the raw materials in addition to the many months it took to weave the basket.

By the late 19th century, Western culture began to permeate Native American culture. Modern storage structures replaced the need for baskets to hold and cook food and plant fibers and bone for tools were exchanged for cotton thread and metal. At this same time, Native-made baskets became increasingly desirable in non-Native homes for decorative purposes. This proved to be lucrative for many weavers; selling one basket could earn the equivalent of one month of wages doing labor. The increased interest and commercial consumption of the Native American culture by non-Natives continued into the beginning of the 20th century. Records and ephemera at BCM indicate some of the Native baskets were purchased during this time period and then later donated to the Museum. The baskets shows here primarily entered the Museum’s collection in the 1940s with the earliest arriving in 1917.

Kolin Perry was the Elvira Growdon Intern for Collections Management and Curatorial Practice in fall 2017. Kolin received his BA in Art History and BFA in Photography from Lesley University in 2016. In May 2018 he completed an M.Ed Teacher of Visual Art Education degree at Lesley. Kolin has previously worked at Boston Children’s Museum as an art programming intern and a visitor experience associate.