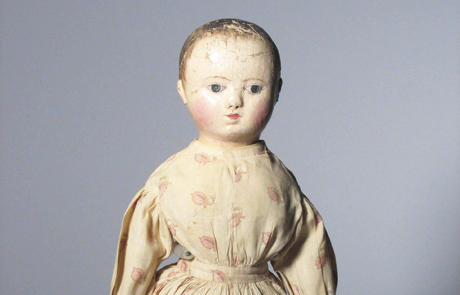 Boston Children's Museum’s Doll Collection dates back to our beginning in 1913, although many individual dolls are much older, dating back to the 18th century. The dolls can be divided roughly into two groups, international Folk Dolls and Play Dolls. A majority of the 1,500 international Folk dolls show the traditional dress and customs of their originating countries. While some folk dolls began as souvenirs, many are now rare, or old enough to represent countries and traditions that no longer exist. Our 800 Play Dolls represent an extremely fine though under-utilized collection of play and fashion dolls from America and Western Europe in the 19th and 20th centuries. Special treasures include rare 18th century Queen Anne dolls, Izannah Walker cloth dolls, 19th century portrait and milliner’s dolls, Shirley Temple dolls, and a 24-inch mechanical doll of Buffalo Bill in full costume. Our Paper Doll Collection numbers approximately 300 sets and includes dolls from the 19th and 20th centuries, fashion dolls, character dolls, and those representing famous people and celebrities in the entertainment field. Our Shirley Temple dolls were used to produce a Dover paper doll publication that gives a social and fashion history of the 1930s as well as dolls for children to play with. We also have a set of the Boston Herald ladies, paper dolls published in the newspaper in 1895-1896, and disseminated throughout the country, which provided dolls for children as well as examples of Paris fashions for women and dressmakers. The Museum's collection of 25 dollhouses and miniature rooms is likely our most well known collection. The houses span from the late 19th century to the 1960’s and include two replicas of the Paul Revere House.

Purchased by the Children’s Museum, 1984