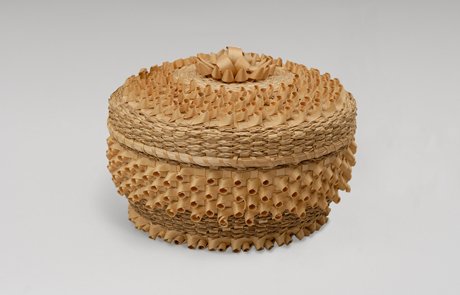 The Museum’s Northeast Native American Collection is comprised of more than 4000 artifacts. Although unknown to many scholars, this may be one of the finest collections of Native artifacts from the Eastern Woodland tribes, composed of objects that range from pre-contact archeological materials to the present day. Although many museums stopped collecting in the 1920s, The Museum’s Native collection has continued to grow. A grant in the late 1970’s allowed the Museum to purchase contemporary Native Arts, allowing us to trace the continuity and changes in the art forms of many cultures.

The Museum’s Native holdings from outside of the northeast, numbering approximately 3000 artifacts, contain representative samplings of objects that express the range of daily life activities of non-woodlands Native American cultures. Artifacts include cross-tribal examples of the same forms that appear in the Northeast Collection such as ring and pin games; objects that were the source for traditions which were or are integrated into Northeast cultures, such as the Plains feather bonnet and powwow drums; a sampling of objects that document contemporary life, such as Pow-wow T-shirts, and objects made by world-renowned artists, such as Maria Martinez, or objects owned by culture heroes such as Sitting Bull.