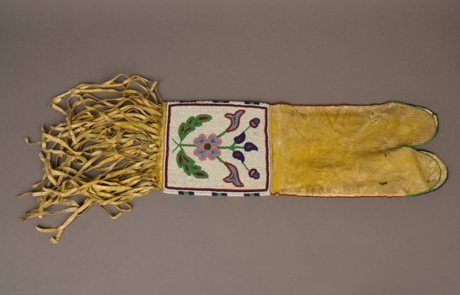 Included in the Museum’s Non-Northeast Native holdings are a wide collection of tobacco bags and tobacco pipes from the nations of the Great Plains. Tobacco was smoked in everyday and ceremonial circumstances. These particular tobacco pipes, because they were made of the sacred mineral catlinite, were used in a special circumstance, “usually brought out at group functions such as war rallies, trading, ritual dances, healing ceremonies, marriage negotiations, and dispute settlements.”* They are therefore considered sacred objects by the Museum and were not photographed for this collection out of respect.

These particular tobacco bags were made to hold the sacred calumet pipes, although one example at the end of the list is a smaller bag for holding tobacco and a pipe for everyday use. The terms “pipe bag” and “tobacco bag” are used to distinguish the ritual vs. secular function of the objects. As a group, the larger bags would have served a similar function, holding tobacco and the separated pieces of calumet pipes when they were not in use. Some of them have been identified as belonging to a specific group, while others are simply categorized regionally as “Great Plains.” Two are associated with individuals, Spotted Elk and Crazy Bull. The latter is the great-grandson of the Sioux Chief Sitting Bull, who gave lectures on Sioux culture in Boston as early as 1925.

The variation in styles, colors, and symbols in the intricate beadwork could just as easily be representative of the different nations who occupied the Great Plains as of the women who made them and men who carried them. While the exact nature of these designs remains obscured, it easy to appreciate their significance in the lives of their original owners when one considers the time and the skill necessary to create these works of art.

Jessica Rymer is the Growdon Collections Intern for spring 2014. She is currently working towards a master’s in Historical Archaeology at the University of Massachusetts, Boston, where she uses clay tobacco pipes to study smoking behavior in the 17th and 18th centuries. Her thesis uses smoking behavior to explore the interactions between English landowners, enslaved Africans, and local Native Americans on Shelter Island, New York.

Gift of the estate of Miss Annie Pecker, 1947

Gift of the Children's Museum of Cambridge, 1966

Gift of the Children's Museum of Cambridge, 1966