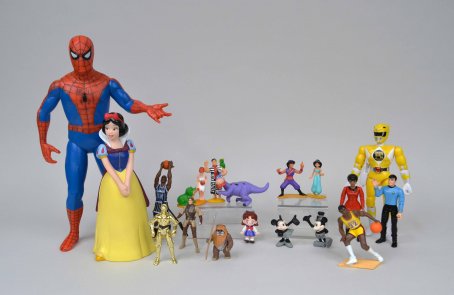 Thanks to the generous donation of Michael Denker and the support of the Denker family, Boston Children’s Museum is excited to accept and welcome a diverse collection of toys collected by Michael Denker between 1985 and 1995. Denker collected plastic figures of animated characters, athletes, and cartoons from all over the world. Most were purchased in the United States, but he also purchased toys directly from sellers in Germany, Japan, and Spain. By 1997 he had built a 1,000 plus piece collection, over 350 of which were donated to the Museum in the spring of 2019. This collection encompasses many of the iconic images that personified the experience growing up in the latter half of the 20th century, with a special emphasis on the 1980s and 90s.

The toy market drastically changed for Americans by the 1970s and 80s. Toy manufacturers were improving the quality of their products while simultaneously making them cheaper to purchase for their consumers. The game changer, however, was the heavy market shift towards product licensing by toy manufacturers. By the 1990s, licensed toys were the most popular on the market.

This collection is comprised predominantly of licensed toys from popular media and entertainment from the 1980s and 90s and includes a wide variation of toys representing Disney, Hanna-Barbera cartoons, Marvel Comics, Star Wars, and Star Trek, among others. Many of these toys have similar replications on the market today that you might recognize. Additionally, this donation has a large collection of figures of prominent athletes from a variety of teams in the National Football League (NFL), National Hockey League (NHL), National Basketball Association (NBA), and Major League Baseball (MLB) in the 1990s.

Being a 90s kid myself, I was excited to re-discover some of the toys of my youth while also learning more about the years of material culture that preceded me. Take a moment to browse through some of my favorite highlights from the collection, and be on the lookout for these toys and more on your next visit to Boston Children’s Museum!

Uella Rodriguez was the Growdon Collections Intern for the summer of 2019. She is pursuing a Master’s degree at Tufts University in History and Museum Studies. While at Boston Children’s Museum, she worked on accessioning and digitizing objects from this donation in addition to contributing to the launch of a general collections inventory.