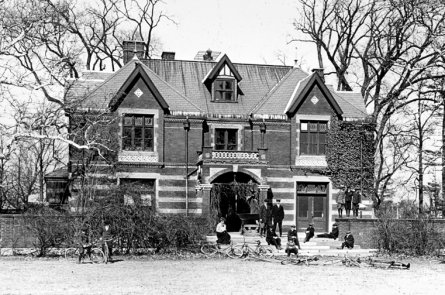 Founded in 1913 by a group of teachers in Boston's Jamaica Plain neighborhood, Boston Children's Museum began a "hands–on" tradition long before that phrase became commonplace. Through Museum games, clubs, and field trips, curators and docents helped children and youth make sense of and even contribute to the growing collections. In the 1920 annual report, Curator Delia Griffin explained that the Museum’s goal was not just interpreting objects but "training the plastic minds of children to observe accurately and think logically." This focus on skill development, as opposed to content acquisition, has been central to the Museum’s history. As early as 1913, it meant engaging youth in identifying and marking nature walks, preparing specimens, making clay and wax models for exhibits, and even attempting a working model of the metropolitan water system.

Collections were important to the early Museum, but, as a Boston Herald reporter observed in 1929, "Each costumed doll, each bright bird or each gay butterfly [is] not an end in itself, [but] a means of giving young visitors a livelier appreciation and a keener knowledge of the world." Children could try a spinning wheel, look through a telescope, and handle live animals. They could create their own displays of Museum objects, study rare artifacts from around the world, or present plays as a way to teach younger children. More than enjoyable natural or social history lessons, these activities developed skills in how to discover information and learn about the world.

In the 1960's, Michael Spock (Museum director 1962–85) led the institution in revolutionizing the traditional museum experience, getting objects out of cases and into children's hands in exhibit areas where children could interact, experiment, and follow their own curiosity. Hands–on learning is now a part of American education and we are proud to have had a "hand" in it from the beginning.

Today, after 100 years, Boston Children’s Museum engages children and families in joyful discovery experiences that instill an appreciation of our world, develop foundational skills, and spark a lifelong love of learning. As an early museum experience for children, our environment is informal, but our purpose is serious. We want children to grow up feeling secure and self–confident with respect for others and the natural world. We encourage imagination, curiosity, questioning, and realism. We provide opportunities for new insights, involvement with the world and understanding of human differences with world–class exhibits and programs.

Winner of the National Medal for Museum and Library Service